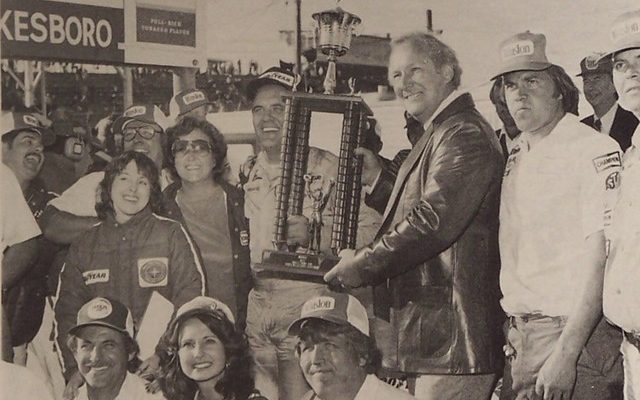 The 1979 Holly Farms 400 was scheduled to run September 30th, but a strange situation occurred on race weekend. Heavy rains plagued the racing activities all weekend. Qualifying was washed out and on race day, even though the sun was starting to show, the prolonged rains caused earthworms and night crawlers to come to the surface to seek relief from the soaked infield.

According to reports, the slimy creatures came out “by the millions” and clogged drainpipes and covered the racing surface. There was no way to clean up the mess in time to get a race in. As a result, the race was rescheduled on the first available weekend—October 14th.

Bobby Allison led most of the race. In the final 150 laps Darrell Waltrip caught Allison. The two hit together hard and Darrell nailed the front stretch wall. Waltrip began crowding off Allison under the caution and got black flagged for the crowding. Waltrip finished 24 laps down in 13th place. Benny Parsons was the race winner. It would be Parsons only win at the track.

Parsons qualified his Chevrolet fifth with a two-day average of 20.084sec/112.029mph. He was one of 14 drivers to top the previous qualifying record, thanks to the new asphalt surface. Parsons led 92 laps in the race.

Bobby Allison led a race high 175 laps on his way to a 2nd place finish. He started his Ford from the outside pole with an average time of 20.043sec/112.258mph. He was bested by Parsons by less than a half a car length when the checkered flag waved.

Richard Petty qualified his STP Chevrolet 11th fastest with a time of 20.387sec/110.364mph. Petty finished 3rd, his 27th career top three finish at North Wilkesboro Speedway. Petty finished one lap down. He did not lead any laps in the race—a rare occurrence for Petty when he finished this high.

Petty would end up in the top three 30 times at the track, and in only five of those races, he didn’t lead any laps. After a somewhat slow start to the ’79 season, Petty found himself second in the points standings, just 17 points behind Waltrip following the Wilkesboro race.

Richard would go on to gain his 7th and final championship a few weeks later. He edged Waltrip by just 11 points—no “Chase” format/playoff system needed to keep it close either.

Dale Earnhardt finished 4th, two laps down. Earnhardt led a total of 12 laps. It was his second Cup race at NWS, and his second 4th place finish. He started from the pole. His record average time was 19.950 seconds, and his speed was 112.783 mph. He had broken the 20 second barrier during qualifying at NWS, the first driver to do so—in a Winston Cup car. A month earlier, a Sportsman Series car toured the track in 19.510 seconds and a Modified took 19.514 seconds to complete a lap.

Ricky Rudd drove his Junie Dunlavey owned Truxmore Ford to a 5th place finish. An average time of 20.191sec/111.435mph put him in 8th at the start of the race. He finished two laps down.

After the ’79 season, Rudd found himself without a ride. With the help of his father and brother, along with brother-in-law, DK Ulrich, Rudd ran a partial season and didn’t know what the future held.

Fortunately, he met up with legendary car builder and mechanic, Harry Hyde and his career would start to take off in 1981.

Of the 29 cars started the race and 19 were running at the finish. The race was slowed nine times for caution, a total of 48 laps. The time of the race was 2 hours, 44 minutes, 1 second. The lead changed 12 different times. Darrell Walrip (104 laps) and Cale Yarborough (17 laps) were the other drivers to lead laps in the race. Buddy Arrington, Ernie Shaw, and Cecil Gordon each improved ten spots over their starting positions—a race high.

Long-time independent, Frank Warren, ran his last race at NWS. Mr. Warren ran 20 races at the track, all in the 70’s—none before, none after. Warren’s best finish was 12th, he did so three times. Running on a limited budget, Warren rarely missed a race in the 70’s. Twice he finished in the top ten in the points championship.

He was recently spotted at a special event in Hephzibah, GA, and I’m glad I had the chance to meet him. I find it ironic that in this very same race, a man named Henry Jones ran his only Cup race at NWS.

In the end hometown Benny Parsons would take home the victory at North Wilkesboro in his only trip to victory lane as a driver at the track. 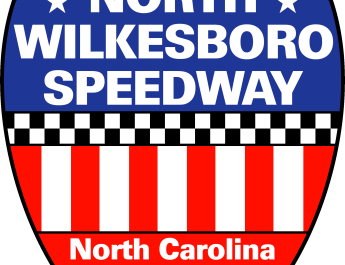 Must See Racing to Invade Historic North Wilkesboro in August

May 11, 2022 Save The Speedway Comments Off on Must See Racing to Invade Historic North Wilkesboro in August

May 26, 2022 Save The Speedway Comments Off on Grassroots Racing Returns to North Wilkesboro Speedway With Racetrack Revival in August and October

May 26, 2022 Save The Speedway Comments Off on Once-in-a-Lifetime Opportunity Presented to SCSCS Competitors the Weekend of August 6th as Part of North Wilkesboro Speedway’s Racetrack Revival

May 26, 2022 Save The Speedway Comments Off on Valvoline Iron-Man Late Model Series to Race on Historical North Wilkesboro Speedway

May 26, 2022 Save The Speedway Comments Off on Governor Cooper Highlights Investments in North Carolina Racetracks, Celebrates Racing’s Return to North Wilkesboro Speedway

May 26, 2022 Save The Speedway Comments Off on N.C. Gov. Roy Cooper Visits North Wilkesboro Speedway In Advance of Racetrack Revival Later This Year

June 1, 2022 Save The Speedway Comments Off on XR and Racing America to Join Forces for Streaming and Content at North Wilkesboro Speedway’s Racetrack Revival

June 7, 2022 Save The Speedway Comments Off on The very first NASCAR Strictly Stock Car race at North Wilkesboro Speedway
Go to mobile version